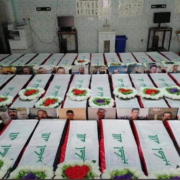 Our statement on the Buriel Ceremony of 104 Ezidi Genocide Victims in Kocho (Shingal/Sinjar):

In the village of Kocho, located in an arid field in the southern side of Sinjar Mountain, volunteers are painstakingly digging graves for 104 victims of the 2014 genocide.

For those surviving members of the village, the burial is a chance to remember the eternal sacrifices made by their friends and family members. In a single moment, it offers victims the dignity of traditional funeral rites that were so brutally stolen from them.

The remains of over a hundred Yazidis were painstakingly exhumed alongside some 17 other mass graves and were subsequently transferred to Baghdad for DNA analysis by UNITAD and the ICMP. The process has been long and harrowing for family members. For the majority of survivors, they have waited 6 years with no semblance of justice and no answers as to the final resting place of their loved ones. The sense of loss and anguish is insurmountable, yet this juncture gives hope that Yazidis of Sinjar may find some manner of peace. It puts forth the opportunity for family members to sit by the grave and pray; to visit them during the proper feast periods.

Sinjar remains the site of one of the most brutal genocides in living memory. When the Islamic State invaded the village of Kocho on the 3rd of August 2014, hundreds of Yazidis were forced to flee into the mountains. Many died of dehydration; the majority were infants and children. On the 15th of August 2014, those that remained in the village, including Nobel Peace Laureate Nadia Murad, were forced into a secondary school and taken captive. Men, boys and elderly women were systematically removed in groups and subsequently executed. Nadia’s brother Saeed was one of them. He was shot six times by a young ISIS fighter, and only survived because he was left for dead amongst the many bodies. The true number of killings remains unknown. Many were denied the chance to say goodbye to their loved ones. In a single day, IS stole every ounce of principle that should be afforded to them.

Some 3000 Yazidis remain missing and each day makes identification more challenging. Some are believed to have been trafficked to Turkey or Libya, while others are presumed dead. Some remains may never be found partly due to the sheer number of unexploded ordinance left behind when IS fled the area. Some fragments of bone have simply been scattered and vanished entirely. As a result, the process of identifying and cataloguing remains may take years.

The final burial process is one that Yazidis of Sinjar are becoming all to familiar to. The mixture of grief and trepidation, the ceremony and melodic prayers, the agonising goodbyes; all cause huge amounts of distress and re-traumatisation of survivors. There remains a sliver of hope that this is perhaps one final step towards closure.
The funeral procession in Baghdad and subsequent burial will take place on February 4th and February 6th of this year.
Our condolences remain with the families. 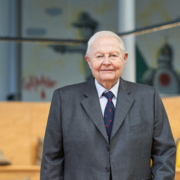 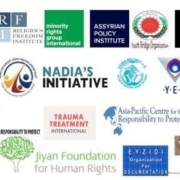 Ezidis Worldwide – Eziden Weltweit e. V. joins over 50 NGOs in joint Statement on Iraq to Commemorate International Day for Victims of Acts of Violence Based Religion.

Joint NGO Statement on Iraq to Commemorate International Day for Victims of Acts of Violence Based on Religion or Belief, 22 August 2020

On this day set aside to commemorate victims of acts of violence based on religion or belief around the world, we stand together as civil society actors to honor those who have been persecuted and killed in Iraq for their religion or beliefs. Since the 2003 US-led invasion, Iraq has suffered internecine conflict and state collapse, degrading a once rich cradle of ancient ethnic-religions and cultures. The Christian population, including ethnic Assyrians, which numbered around 1.5 million at the start of this century, has been reduced to a mere 200,000 today. Other minority communities such as Yazidis, Sabean-Mandaeans, Turkmen, Kak’ais, and Shabaks have faced existential threats in recent years.

ISIS exploited the concomitant deterioration of religious freedoms as part of their genocidal campaign against ethno-religious minorities across the Sinjar region and the Nineveh plains. The targeted violence sought to erase the presence of religious minorities in Iraq altogether, and particularly of the Yazidis, decried by ISIS as devil-worshippers. ISIS executed those who refused religious conversion and destroyed countless shrines, churches, temples, and other cultural sites. The effects of religious discrimination against minorities are widespread and intergenerational, as many of the displaced are reluctant to return to their ancestral lands for fear of religious persecution. This situation is compounded by the presence of militia groups in the Sinjar region and Nineveh plains and failures to meaningfully address governance concerns.

We welcome the efforts already taken to safeguard religious freedom and to counter-narratives of violent extremism in Iraq, such as the Interfaith Statement on the Victims of ISIL endorsed by religious leaders from the Christian, Sunni, Shia and Yazidi communities, and supported by the UN Investigative Team to Promote Accountability for Crimes Committed by Da’esh/ISIL (UNITAD) and the UN Office on Genocide Prevention and the Responsibility to Protect. However, without justice and accountability for past atrocities, religious communities will continue to face persecution and the threat of repeated violence. Improving religious freedom is linked to holding perpetrators of genocide accountable, to providing secure conditions of return for minority communities, and to supporting those who have experienced the trauma of religious violence that drove them from their homeland.

We urge the Government of Iraq, the Kurdistan Regional Government, the United Nations, and the wider international community to take the following steps:

1) To adopt legislation that ensures reparations for survivors and delivers justice for victims of genocide, war crimes, and crimes against humanity.
2) To empower groups working towards social cohesion such as the Yazidi Survivor Network and the Iraq Religious Freedom Roundtable to advocate for their own interests.
3) To promote religious education across Iraq by means of cultural events and activities that inform the population about minority communities; integrate education about religious minorities in the Iraqi school curriculum to combat misinformation.
4) To implement innovative approaches to promote religious and cultural diversity, including community-based approaches using art and virtual reality technology, such as Nobody’s Listening exhibition.
5) For UNITAD and the UN Office on Genocide Prevention and the Responsibility to Protect to facilitate a follow-up conference to broaden the endorsement for the Interfaith Statement by other religious communities. The international community should expand its support for the investigative activities of UNITAD.

5. Asia-Pacific Centre for the Responsibility to Protect (Australia)

21. International Coalition for the Responsibility to Protect (United States of America) 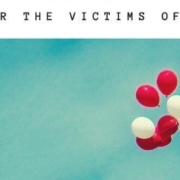